Here are some of the things commentators might say, and herewith our attempt to explain what they mean:

With apologies to our Heroes of the Sky, these definitions are intended to help the lay person to understand what is going on. They are not intended to rival SACAA or RAASA definitions!

A line at the very front of the audience, usually marked with a barrier. The audience must not go beyond this line for safety reasons. The display line is a measured distance from this crowd line. 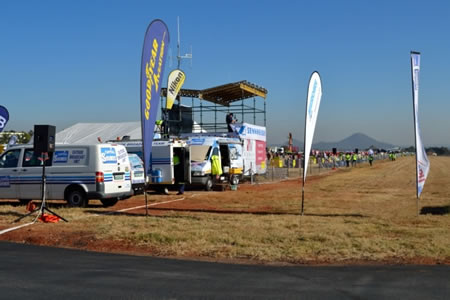 Not necessarily the middle of the crowd line, but the point that highlights are directed at. For example pairs will aim to make passes at this point and breaks and cascades are normally best viewed from here.

The display datum is the centre of the display line. It has to be marked unless it is obvious from some landscape or building feature.

A clearly identifiable line marking the closest the aircraft are allowed to fly to the crowd. This may be a landscape feature, possibly parallel to a runway at airstrip shows, or a line of fluorescent buoys at a seaside show. It is not necessarily the same as the actual flight line although aircraft will normally get as close to the display line as they can. There can be several display lines, because how close the aircraft can fly to the crowd varies depending on the speed of the aircraft and on the type of display (aerobatic, flypast or hovering). Normally only the closest and furthest display lines would be marked and the pilots use their judgement if their display line is between the two marked ones.

There are three principal ways to control the aircraft. Most manoeuvres are one or a combination of these three:

This is to change the angle of the aircraft from front to back, so that the nose goes up and the tail goes down, or the other way round.

The angle of the aircraft changes from side to side, so that the tip of one wing goes up and the other goes down.

The front of the aircraft goes left and the back goes right, or the other way round, so it swivels whilst flat. 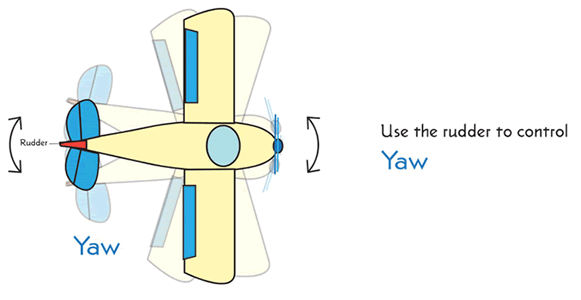 The right way up. 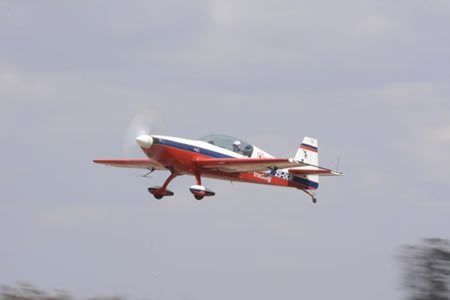 Each aircraft slightly behind and to the right of the one in front. 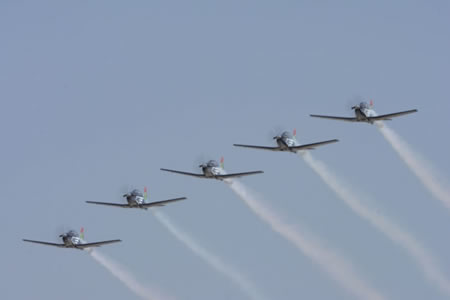 Each aircraft slightly behind and to the left of the one in front. 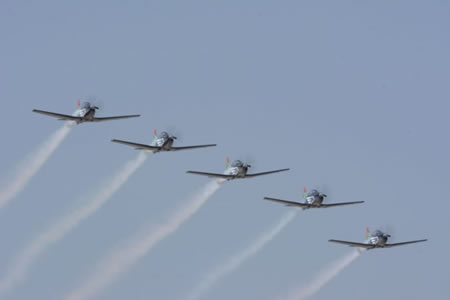 Each aircraft is directly behind (and generally slightly below) the one in front. 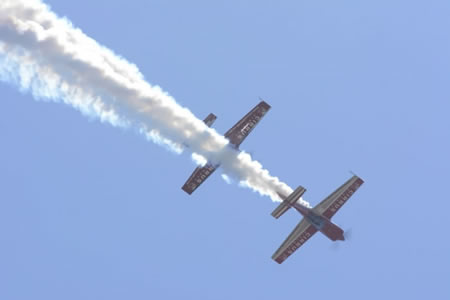 The Leader is flanked and slightly to the rear by his wing men on either side of him forming a V. 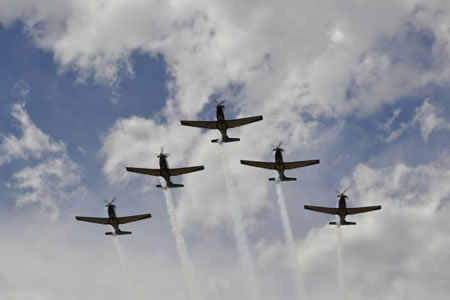 The leader is flanked by his wing men directly next to and in line with him so that the formation is in a straight line. 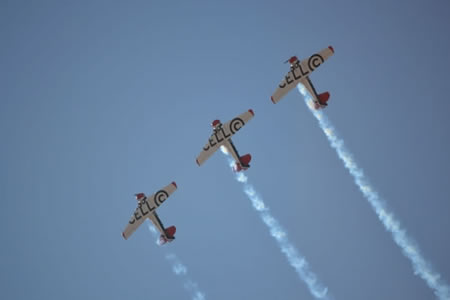 This formation is made up of any number of aircraft. In a four ship formation the leader is in front and flanked by a wing man on either side and slightly behind. The forth ship will slot in between and behind the two wing men forming a diamond shape. 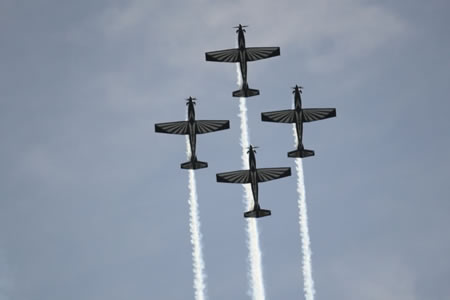 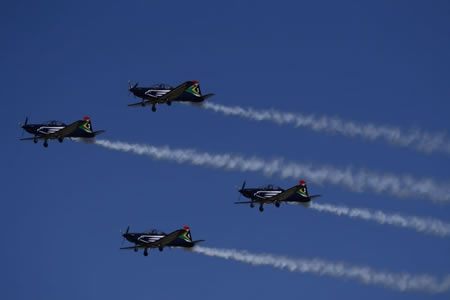 Flying along the flightline, from left to right or from right to left. 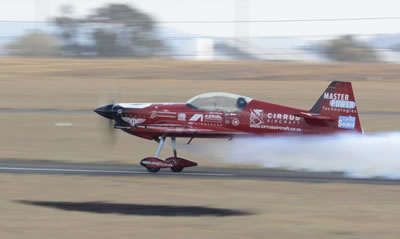 Flying along the flightline, upside down.

One aircraft the right way up and another above it and upside down, so that one looks like a mirror reflection of the other. 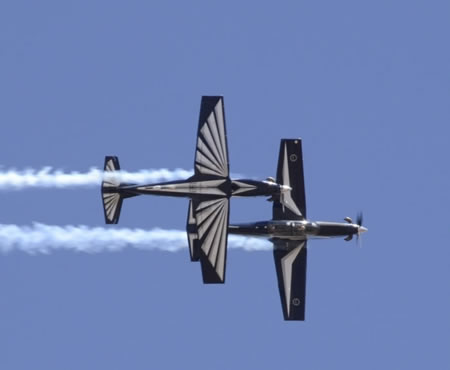 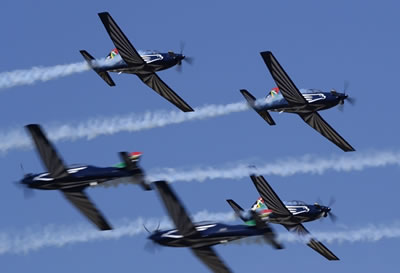 Flying along the A axis, tilted at an angle towards the crowd with the furthest wing raised, giving a good view of the cockpit and top of the aircraft. 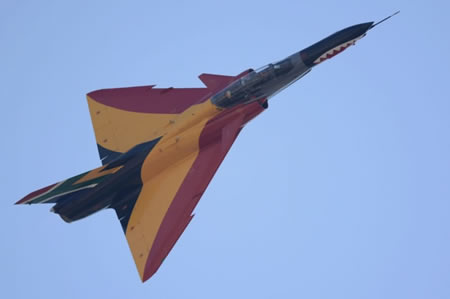 More extreme than the Canopy-up pass, because the wings are not just tilted, but virtually vertical, so the whole of the topside (or underside) is visible to the crowd. 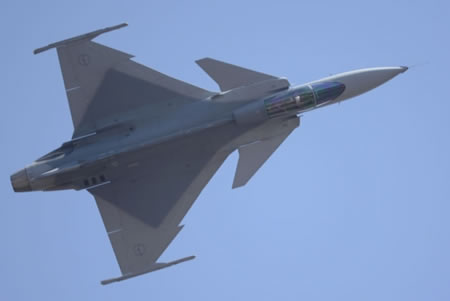 The aircraft generally start along the B axis flying towards crowd centre. At the same instant they separate, moving away from the centre in unison, usually moving vertically as well as horizontally, and at the same degree of separation, creating a broadening pattern in the sky. Various formations can be created such as fans, fountains or cascades if a sufficient number of aircraft are involved. 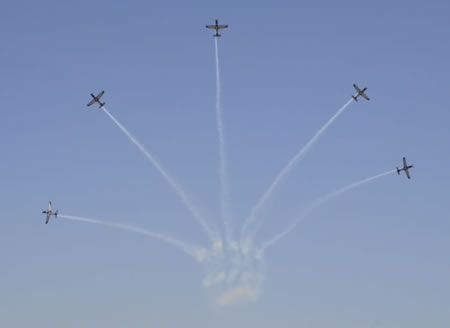 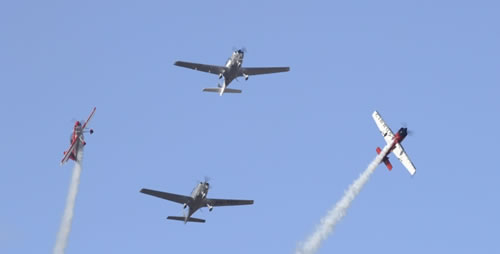 Starting from level flight, the aircraft's nose lifts (like a plane taking off) but in a circular way rather than a straight line. The curved take-off continues all the way round the circle, ideally ending at the same point that the loop began and continuing along the same path that it was taking before the loop began. The appearance is that one or more aircraft create a vertical circle in the sky. 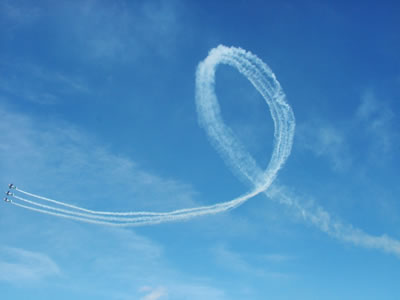 Whilst making a pass (generally a flat, initially erect pass) the aircraft does one twirl (makes one complete turn on the horizontal axis). Unless otherwise described, the roll is at a constant speed. It can be slow or fast. Some aircraft can make a complete rotation in a second. 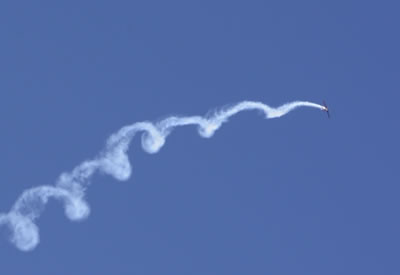 Like an aileron roll, but with planned momentary stops at predetermined points. A four-point hesitation roll, for example, has four stops at every 90 degreesequal intervals in the roll. 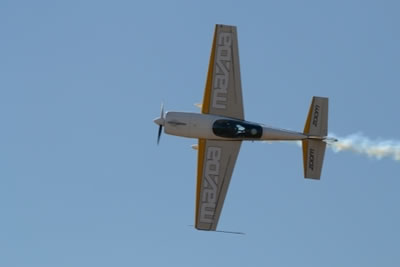 This manoeuvre begins like an inside loop, but when 5/8ths has been completed, i.e. when the aircraft is pointing 45 degrees down (as always in a loop the plane is inverted at this point), the aircraft performs a half-roll, i.e. a roll through 180 degrees, so that it is upright. The aircraft then flies out horizontal. The pilot can adjust the interval between the half-roll and returning to horizontal to adjust speed and height. The effect of the manoeuvre is to reverse direction. 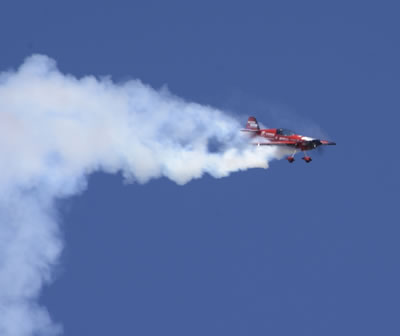 This starts with a pull-up from the horizontal to 45 degrees. The aircraft does the half-roll at this point to become inverted and continues the remaining 5/8ths of the loop, returning to horizontal, erect flight. 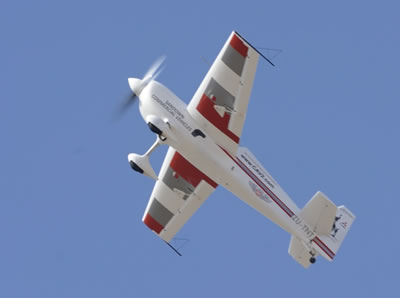 Two Half-cubans can be combined (with half-rolls at each of the 45 degree points) to make a Cuban, or 'Cuban 8'. The full Cuban eight (or pair of half-Cubans) draws a figure of 8 on its side. 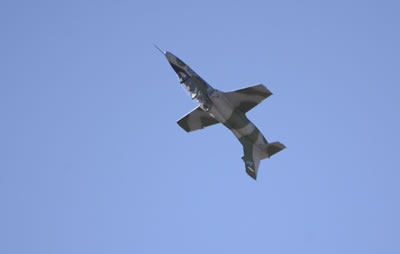 A pair of reverse half-cubans.

A combination of a loop and a roll. The aircraft completes one loop but at the same time twists through a complete turn. The very beginning is similar to the loop, but after the circle begins the aircraft twists gradually through 360 degrees. Like the loop, the aircraft is in the same position at the end as it was in the beginning. 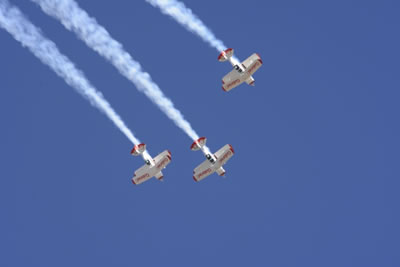 The aircraft climbs vertically until it almost stalls, then turns at the top of its climb and, nose pointed back to earth, falls vertically so it is flying in a direction opposite to its original direction. Imagine a car heading down a cul-de-sac, doing a handbrake turn at the end and returning. It is like that but vertically. 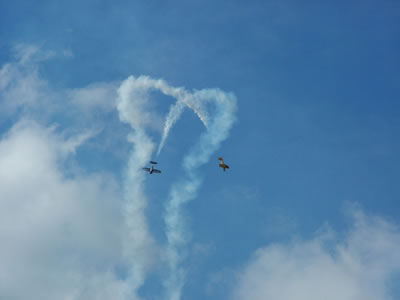 The aircraft flies vertically, straight up, until it loses momentum. It then falls backwards, tail first, retracing its upward path. Eventually the nose drops through 180 degrees, so that it is pointing down position. The aircraft then goes through a quarter-loop to recover level flight. 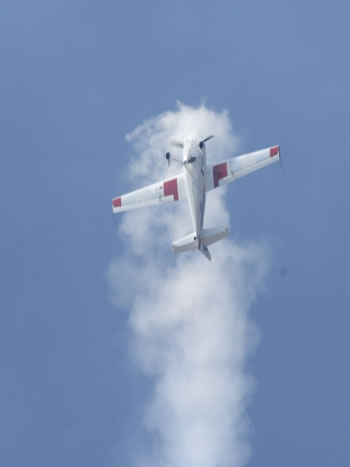